I do not “forgive & forget”

Most of us have been given this advice at some point in our life. Some of us have heard it from other Christians, and if you’re anything like me you may have thought that it sounded like a good idea! Maybe you felt like you weren’t good at forgiving because you couldn’t quite forget how that person hurt you.  Maybe you felt like you weren’t a “good Christian” because of this. Maybe there is someone in your life that you think you have forgiven, but are not completely sure if it is seen as true forgiveness because you have distanced yourself from them. I am here to tell you why I stopped telling myself to “forgive and forget” and why you can, too.

We know that forgiveness is a huge aspect of the Christian faith. Whether you are Baptist, Presbyterian, Catholic, etc., we have all been taught that Jesus forgives, so we should as well. So, the “forgive” part makes sense, biblically…

Forgiving someone does not just involve telling God and/or the other person that you have done so. In order to truly forgive, one must be at peace with the other person and with the situation. It is an active CHOICE. It is hard work and can take a lot of humility to forgive someone; pride often gets in the way of forgiveness. In the end, I think we can all agree that forgiveness is necessary, particularly if you have a friendship with the person.

But… where does the “forget” part come into play? I believe that most people who give us this advice are doing so out of love and sincerity, but I wonder how many people have actually thought about what forgetting something really entails. Sometimes we feel that by forgiving someone, we will be saying “it’s okay”, when it might not be. I think that this

misconception about the biblical concept of forgiveness

stems from the wording of the advice forgive and forget. Forgetting implies that you have completely wiped the transgression from your memory and will never think of it again. 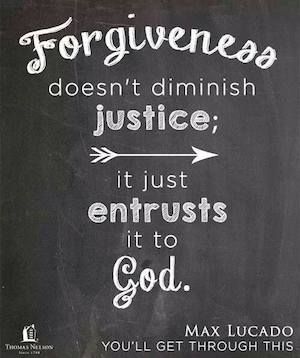 All of these teachings are very accurate, but none of them explain the word forget quite like we use it today. Society has turned the phrase “forgive and forget” into something that is said without thought. It is seen on t-shirts, notebooks, and tattoos. Even in the above passages, forgetting does not mean to completely wipe the transgression from your memory. It simply means to not hold it against another person… which in itself is a part of the concept of forgiveness. So, why add the “forget” part? All it does is lead people astray, which allows them to have their hearts hurt over and over again.

After far too many years of striving to FORGET and getting hurt over and over again by the same people in the same situations, I have stopped telling myself to forgive and forget. It ends at FORGIVE.

And yes, you can still love others in this way. It just means that you are loving yourself, as well.

This site uses Akismet to reduce spam. Learn how your comment data is processed.

Hello, lovely readers! Thank you for visiting my blog. My name is Kelsey Young and I live with my husband, dog, and baby boy in the DC area. I went to Cal State East Bay & ODU and am a Delta Zeta alumnae!

I am currently a Student Ministry Leader at a local church. I hope to start on my Master’s of Divinity in a couple of years. In the meantime, I will continue to enjoy the beach, reading, wineries, hiking/spending time outdoors, outings with friends, and lazy days with my husband and baby.